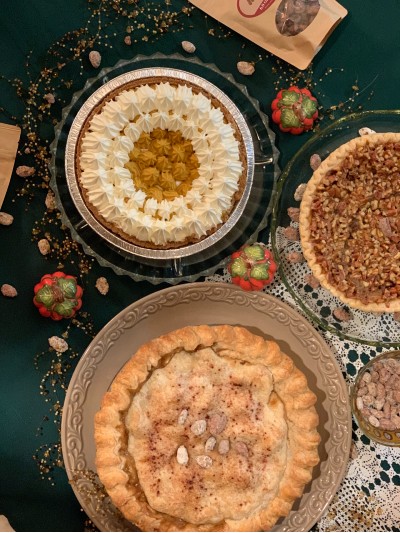 In addition to making great snacks, several of Sweet Almande’s products make great additions to traditional holiday recipes, assuming, of course, that they don’t somehow disappear before you start cooking!

Several of these holiday recipes are on our website under the RECIPES tab, and the ones that aren’t, will be soon!

For the almonds, we generally use the savory slivered almonds, as they add a nice crunch and a pop of flavor without being too hard.  One of my favorite holiday uses is to do a green bean casserole, and instead of the crispy onions (or in addition to, if you want both) I’ll sprinkle the Roasted Garlic slivered almonds on top just before serving.

And if you want a bit of spice instead, the Sweet Chili (mild) or the Smokey Hot Chipotle slivered almonds would work just fine instead.  And for a really great before dinner snack (while everyone is waiting for the holiday meal to finally be done), make a Blue Cheese Ball with the spicy Wing Nuts slivered almonds.  We have a recipe on the website, but if you have a family recipe that is tradition, of course use that instead.  The blue cheese cools down the heat from the Wing Nuts slivered almonds and the mild wing flavor comes through and really makes for a great snack, especially served with Chicken flavored crackers.

And of course if you want something besides pumpkin pie, the Cinnamon Pecan Crumble Apple Pie using the traditional Cinnamon Pecans just can’t be beat!  Of course if you’re just looking for a nice sweet holiday snack, the Pecan Cranberry Pie Crust Cookies using our Cinnamon Orange pecans would be the right choice.  The pecans can also be used in your favorite nut breads or fruitcakes as well.  The cookies and nut breads make great gifts for neighbors, family, friends, or as a hostess gift!  And all of these recipes are available on our website, along with several others.

In addition to our favorite uses and recipes, you can certainly adapt any of your favorite recipes to use our almonds, pecans and cashews as well.  Cinnamon pecans (whole or chopped) are great sprinkled on to of an apple or berry crisp, for example, and any of the chocolate flavors would be great placed on top of a batch of brownies just as they come out of the oven (the mildly spicy Hot Chocolate pecans are my favorite with brownies, but the Chocolate Raspberry, Chocolate Cherry and Chocolate Orange are really, really good as well!).

And for a quick and easy dessert, try some Eggnog or Hot Buttered Rum pecans or cashews on top of vanilla ice cream, or any favorite flavor  – it takes an everyday dessert and makes it special).

We hope that you are able to experiment with some of these recipes during the holiday season, or use some of our products in your own recipes instead.  Just remember – the trick to using any of our almonds, pecans or cashews in your favorite recipe is not to open the bag until it’s time to start cooking!  If you do, they somehow disappear before you start cooking!! 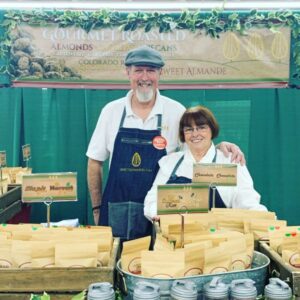 Recipe Ideas
Almonds: Your Skin and Hair Will Thank You!

It’s a Wrap: We’ve Got Your Gift Ideas
Scroll to top
Manage Cookie Consent
To provide the best experiences, we use technologies like cookies to store and/or access device information. Consenting to these technologies will allow us to process data such as browsing behavior or unique IDs on this site. Not consenting or withdrawing consent, may adversely affect certain features and functions.
Manage options Manage third parties Manage vendors Read more about these purposes
View preferences
{title} {title} {title}